Why Are Employees Quitting Jobs in Masses? 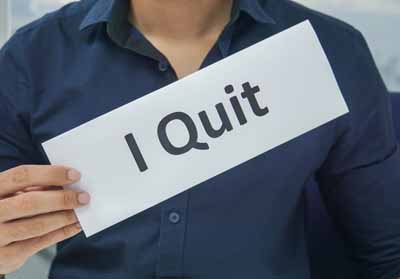 In November of 2021, the rate at which people quit their jobs reached a 20-year high in what’s being called The Great Resignation. What’s causing people to leave their jobs en masse all of a sudden? There are a number of reasons.

According to the Pew Research Center, the most popular reason given by workers leaving their jobs last year was that the pay was too low. This has been a major part of public discourse for a while now. Prices are going up. Rent is going up. Meanwhile, wages are stagnating. For many employees, their paychecks are no longer enough to live on.

The second most popular reason was that there was no opportunity at the job for advancement. A particular job may seem a dream to an employee when it’s first offered to them. However, it can lose its appeal after a few years of doing the same thing day after day. They’ve gained knowledge and experience at this job, and they want to put it to good use: be given more responsibility, a better job title, more pay, etc. But for whatever reason, the company won’t let them move forward.

Some bosses even take this a step further. When someone leaves the company, rather than hiring someone new, they’ll simply give that person’s responsibilities to another employee: more work and more responsibility, but without the corresponding promotion or salary increase.

This ties in directly with the third most popular reason for quitting a job: a lack of respect at work. Some employers abuse their authority. They try to force employees to work overtime or come in on their day off – and they threaten discipline, or even termination, if they don’t. They make impossible demands and act like it’s the employee’s duty to bow to their every whim. Job environments like this can become intolerable quickly, paving the way for resignation.

While low pay and poor working conditions are certainly valid reasons to leave a job, these problems have also been around for years. Why now, all of a sudden, have employees finally had enough? There are a number of possible reasons, but one of the biggest factors likely involves the pandemic.

For one thing, many older baby boomers with investment accounts that were at peak levels chose to retire. Moreover, nearly 1.8 million women left the labor force amid the pandemic. Presumably after having a taste of not working, they simply chose not to return.

These two classes of workers created vacancies for many millennials to move into – many with a significant pay increase as employers struggled to find replacements. Besides driving the Great Resignation, these circumstances may be high among the leading causes for inflation. When COVID hit the U.S., many companies switched to work-from-home models. People who had spent years coming into the office day after day were suddenly given the tools to do their jobs from anywhere.

Employees with children found themselves better equipped to balance work and family life. Employees with long commutes now didn’t have to waste all that time on the road anymore.

A plethora of benefits to the new work-from-home model became apparent. What’s more, productivity levels didn’t suffer as employers feared they would. In most cases, they remained the same or even improved!

Then, when COVID restrictions were relaxed, many of these companies started requiring their employees once again to come into the office every day. Having seen that things can be better than having to go back to the way things were before, has been eye-opening for many workers.

Smart companies are coming up with solutions, and future articles will cover some of these solutions. One tool than can help with retention is total compensation reports, like those from COMPackage.com. These help to educate workers as to the total value of their compensation when costly benefits are understood.


No Responses to “Why Are Employees Quitting Jobs in Masses?”