What might be the impact of a $15/hr. minimum wage on your company? 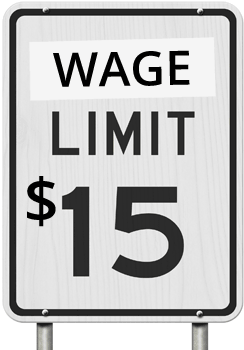 Raising the minimum wage has been an often discussed topic among politicians, business owners, and corporations. This is a policy that would affect how many companies conduct business. In 2014, Seattle set the bar by passing a law that gradually increased the minimum wage from just over $9 in 2014 to $15 an hour in 2021.

On the federal level, this idea had been floated in Congress for several years, culminating in H.R. 582, which was introduced in January of 2019. H.R. 582, also known as the “Raise the Wage Act,” set a six-step, phased-in increase of the minimum wage from $7.25 to $15 per hour by 2024 passed the Democratically controlled House; but it was killed by the Republicans in the Senate in 2019.

However, the Seattle law gained new attention with then-Democratic presidential candidates Joe Biden and Bernie Sanders. As the Biden administration takes power and the Democrats assume control of both the House and Senate, the $15 an hour minimum wage is again in play.

As with any law, there are both pros and cons to increasing the minimum wage for businesses, employees, and consumers.

It’s important to look at and understand all sides of this type of federal mandate.

Paying people the funds needed to pay their bills and purchase products, goods, and services is a great way to boost the economy. An increased minimum wage gives workers more buying power and can provide an uptick in the economy through increased spending.

Economic stimulation due to increased purchasing power can increase demand for products and services. This can lead to job creation to keep up with demand.

Help to Employees and Their Families

Along with increased purchasing power, employees and families benefit. An increased minimum wage helps with price inflation and the inevitable increase in the cost of living.

There are also some potential downsides that need to be considered with a significant increase in the minimum wage, including the following.

Increased minimum wages increase overhead costs. This can result in a higher product price which must then be passed on to consumers.

Because of increased business costs, companies could potentially freeze hiring to keep costs under control.

The cost of outsourcing is less than the cost of new hires. Rather than a hiring freeze, companies could increase outsourcing to control costs.

Some Additional Benefits for Businesses

On top of the pros above, there are additional benefits for your employees and your business from raising the minimum wage. Higher paid employees feel more job satisfaction. With it comes higher levels of collaboration, creativity, and communication. Satisfied employees are likely to remain loyal, lower turnover, and help your business by lowering hiring and training costs.

Higher wages can also lead to higher motivation and better performance. This is especially beneficial if your employees were working multiple jobs to pay their bills. Higher wages may allow some employees to give up their side jobs and focus on your company.

Many business owners and economists believe that a minimum wage increase is inevitable. It’s important to prepare your business now to be in a position to absorb rising operating costs.

Preparing now can help you prevent the need to pivot at the last minute when the new minimum wage goes into effect. Not only will you put your business in a stronger position, but your employees will also appreciate that you care enough about them to prepare.

It’s also important to make sure employees know all the benefits they are getting with your company. A total compensation statement, like those offered by COMPackage.com, can an employee see how generous the company has been in terms of the value of the many benefits (obvious, and not-so-obvious) you provide.


No Responses to “What might be the impact of a $15/hr. minimum wage on your company?”